The sun had set beyond yon hill, Across the dreary moor, When weary and lame, a boy there came, Up to the farmer's door, "Can you tell me whe'ere I be, And one that will me employ," To plough and sow, to reap and mow, And be a farmer's boy, And be a farmer's boy?
Published: 19 July 2018 | Written by The Web Orderly Sergeant | Hits: 693 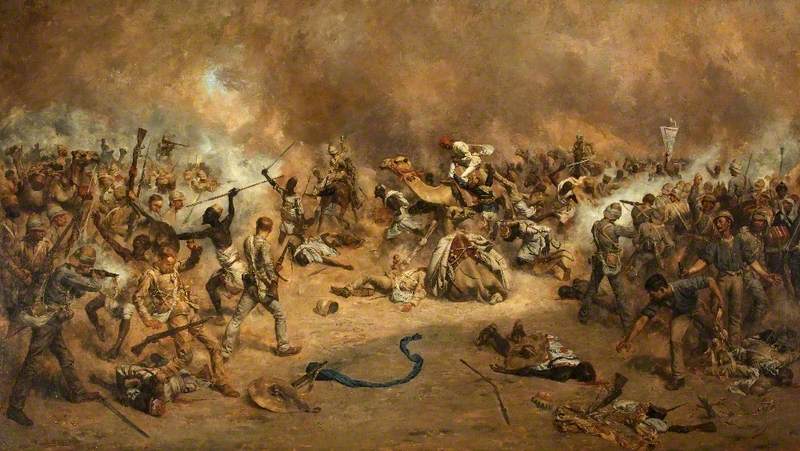 January 1885 found the 1st Battalion of the Princess Charlotte of Wales’s (Berkshire) Regiment, (the old 49th) in the Suakin area of the Sudan. It was part of the British force sent to assist in protecting British authority which was being threatened by a fanatical Moslem leader, the Mahdi, and in particular a local chief, Osman Digna, who was supporting the revolt.

In March 1885 Osman Digna and his army were reported as being some 12 miles south-west of Suakin and on the 22nd it was decided to establish forward depots and a force moved off from Suakin for that purpose. The force, commanded by Major General Sir John McNeill, VC, consisted of the 1st Berkshires, a battalion of Royal Marines and three Indian Regiments together with a little over a squadron of cavalry and a vast unwieldy convoy of pack animals and light carts. The country was covered in dense scrub which made movement so slow that after several hours of tiring march the force had only reached the small staging post of Tofrek, about eight miles from Suakin.

General McNeill decided to halt there as a small clearing in the scrub offered a suitable camp site. Working parties were out constructing zaribas (rectangular defensive works of cut scrub and thorn bush) when without warning thousands of yelling Arabs erupted from the dense scrub through which they had crawled unobserved. Some managed to penetrate the as yet unfinished zaribas and the Berkshires were able to grab their rifles only moments before the main body of the enemy attacked. The Arabs had few firearms but the range was so close that a number of the Regiment were struck down by thrown spears. Once an organised line was established the immediate danger was over but the Arabs continued to attack with fanatical bravery. The disciplined fire of the soldiers inflicted over a thousand casualties although the Arabs’ determination brought them at times to close quarters and there followed fierce hand to hand fighting. Casualties were fairly heavy. The British force as a whole lost about 300. The Arab casualties, from the nature of things, were not known accurately but probably reached 2,000 and Osman Digna’s power was broken.

Tofrek was another "soldiers’ battle" in which the discipline of individual soldiers averted a terrible disaster and turned it into victory. To mark its conduct at Tofrek (which was sometimes referred to as "McNeill’s zariba") the Regiment received what was then a unique honour when on 1 October 1885 it was notified that:

"Her Majesty has been graciously pleased, in recognition of the gallant conduct of Princess Charlotte of Wales’s (Berkshire Regiment) in the action at Tofrek, to approve of the Regiment being in future designated Princess of Charlotte of Wales’s Royal Berkshire Regiment. Her Majesty has been further pleased to approve of the facings of the Regiment being changed from white to blue, the Royal facings."

After the battle the battalion returned to Egypt, but the situation in the Sudan required a return visit in October the same year. On the 30th October they fought a further battle at Ginnis. They were later awarded the battle honours of 'Suakin 1885' 'and 'Tofrek'. After leaving the Sudan half of the battalion went to Malta, with the other half going to Cyprus. Service in Bermuda, Halifax, Gibraltar and Ireland followed with a final posting to Aldershot where they embarked for the First World War.