The sun had set beyond yon hill, Across the dreary moor, When weary and lame, a boy there came, Up to the farmer's door, "Can you tell me whe'ere I be, And one that will me employ," To plough and sow, to reap and mow, And be a farmer's boy, And be a farmer's boy?
Published: 05 March 2018 | Written by The Web Orderly Sergeant | Hits: 1153 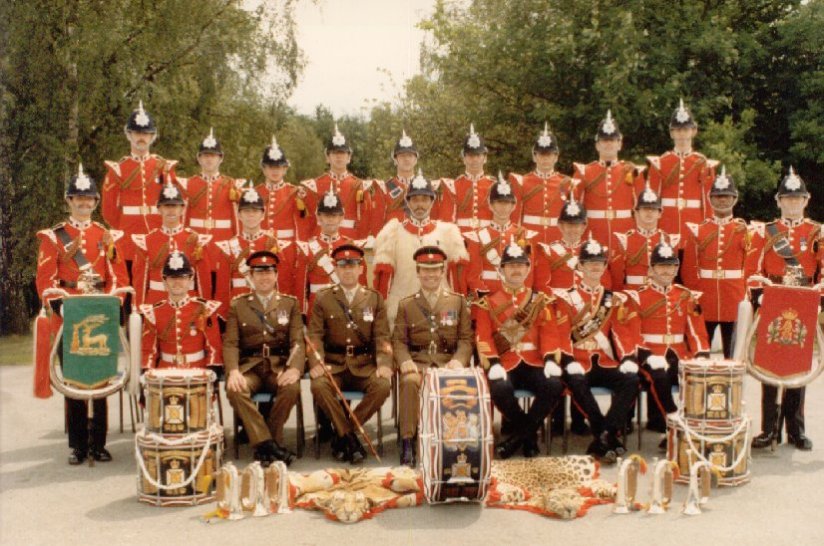 The drum Major was and still is the visible presence of a Battalion on Parade. Up until the late 1960s 1 DERR did not have the ceremonial dress you see today. Depending on the Battalions role the Drummers were always operational soldiers within the Battalion. In the main they deployed as members of a Machine gun Platoon. The Drum Major is responsible for the day to day running and deployment of the Corps of Drums. In days of yore Drum Majors were responsible for administering and supervising any 'Floggings' required, although it must be said that flogging during the existence of 1 DERR was never used (Although I believe some Commanding Officers wish they could have used it) On the short parade stick and ceremonial mace used by Drum Majors today leather strips, cord or silver chain is entwined about the staff and is thought to be a reminder of his earlier duties as keeper of the cat-o-nine tails. The Mace itself is simply his symbol of office and originated from that which town Beadles (The forerunners of the Police) carried to deal with unruly mobs and, at the head of town processions, to clear the route.

What follows is a list of the 1st Battalion Duke of Edinburgh's Royal Regiments Drum Majors in order of appointment. I must make it clear this list is not definitive as the records are less than complete. If any Ex member of the drums can assist in completing the picture, that help would be welcomed.